You are here: Home / Faith & Culture / + Endless Grace / Even the strong need water 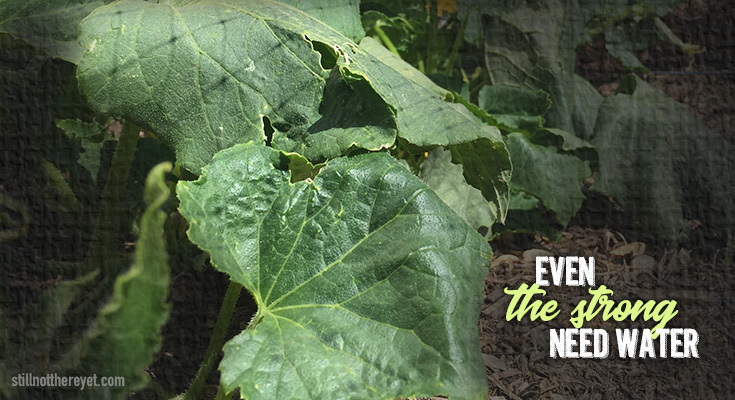 We almost gave up, but we decided to try another vegetable garden this year despite last year’s failures. All the tomatoes had some sort of rot on them and our beans never got past infancy.  The only successful crop were the cantaloupes, which basically took over the whole garden but did give us six healthy melons from a single plant.

Nevertheless, we tried again… with better spacing, consistent water, more fertilizer, and even some composting.

A few months in and things are going pretty well, all things considered. With me being the only family member who is home on a regular basis throughout the growing season, daily watering has become my thing. And (try not to judge me too much here, when my husband is traveling I have lots of words to use up somehow) I have found myself talking to the plants a bit.

I’m not baring my soul to them or anything but just cheering them on, so to speak, encouraging them to grow strong.

“There you go, Tomato, you’re filling out your cage quite well.”

“Wow, Bean, you are the first to harvest! You rock!”

“Oh Zucchini, what beautiful blossoms you have!” (LOLOLOL)

And maybe a bit of constructive criticism.

“Now, Cucumber, don’t go hogging into Zucchini’s territory. You have plenty of room on your side.”

Over the past few weeks, as the plants have gotten bigger and stronger, I’ve noticed they vary quite a bit in how they show their needs. Cucumber and Zucchini are always the first to droop when they are thirsty. Bell Pepper struggled under the weight of a nasty grub who kept tearing her down.  Roma Tomato has been fighting off some ferocious weeds.

The thing is, they all need to have plenty of water, be free of pests, and have enough room to grow. It’s just that some are more quick to be obvious about it.

After 24 hours without water, Cucumber and Zucchini are super droopy. It’s like they are jumping up and down, screaming, “Please water me immediately!” And just 30 seconds of concentrated watering is enough to give them what they need to be strong for another day’s growth.

The droopy veggies get the water

Because of how much these two plants display their needs, I am more likely to point the hose in their direction first. But this morning, I looked at Cherry Tomato and Ghost Pepper and thought about how they both need water too, but are just less likely to advertise it.

And that got me thinking… people are the same, aren’t we? Some of us wear our needs on our sleeves. As a result, we are more likely to have those needs filled by those around us. But others, may appear to be relatively need-free. Some strong plants, for example, can go several days before looking super droopy, but here’s the thing: if I let it go that far, Ghost Pepper can go from a little droopy to truly dying in no time flat. (Don’t ask how I know that…)

I’m definitely no expert (actually, I’m pretty much a complete non-expert when it comes to gardening), but I think the key is in knowing the individual needs of the plants around me. If I water them all exactly the same, I can probably skate by for a period of time, but eventually one might become overwatered while another doesn’t get enough. The strong need water too

This week, two high-profile people committed suicide. From what I can tell, they weren’t necessarily Cucumbers or Zucchinis in terms of displaying their needs. According to CBS News, Kate Spade’s father spoke with her not long before her suicide. “I don’t know what happened,” he said. “The last I talked with her… she was happy planning a trip to California to look at colleges. She doted on her daughter.”

Anthony Bourdain’s good friend Michael Ruhlman told CNN he, too, was stunned by the news, saying, “The last I knew, he was in love. He was happy.”

Someone once told me he feared he had made a mistake in praising his seemingly-needier child the most. “I wonder if my other children actually needed it more, but I didn’t notice…” he confessed.

The more experienced I get, the more I recognize the lessons certain patterns are teaching us. So what can we learn here? I’m certainly no more of an expert in people than plants. But perhaps the key is still in knowing the needs of those around us… and remembering that even (especially?) “the strong” need watering.