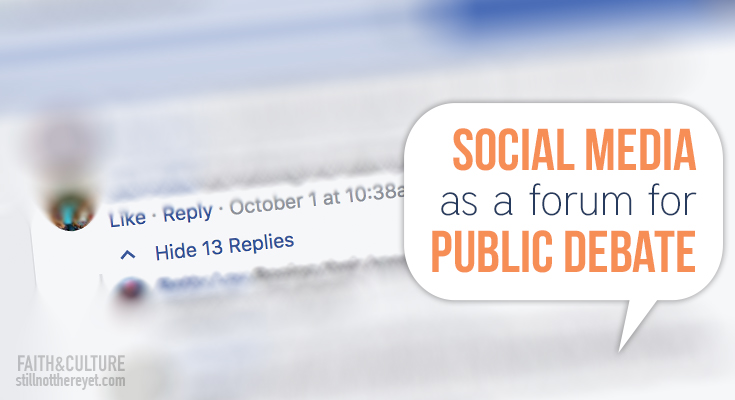 I’ve been using social media for a decade now. I can still remember some of my first posts, where I wrote stuff like, “Going to Target now. Gotta get some milk.” Wow. So profound. Or how about this one: “Just got back from picking the girls up for school. Now begins the homework rush.” Yeah, I know. You are free to copy that one for your next post.

Eventually I learned I didn’t need to tell everyone where I was going to be throughout my day. And gradually, I figured out what worked for me, in terms of social sharing. I think we, as a social media community, settled into a sort of rhythm for awhile.

Social Media as a Teenager

Like any group, growth and changes happen over time. Hey, look at how much we, as individuals, change during puberty. We go through some really rough times during those early teen years. I feel like, maybe, we’re in that spot with social media right now. We’ve been at it long enough to feel like we’ve got the swing of things, but now there are both internal and external pressures threatening to boil us over.

Here’s how I’ve seen that play out in my own feeds. A few months ago, I shared an article that particularly resonated with me about some of the controversial topics being discussed in the news at that time. Within 30 minutes there were several very strong comments posted in reply, and two people had already started arguing back and forth in one of my threads.

I was sad, frustrated, and embarrassed. I quickly deleted the whole post.

What happened? When I looked at many other peoples’ commentaries, I didn’t see the back and forth arguing some of my posts seem to ignite. Why do some of my friends seem to write stuff everyone agrees with?

As I mulled that situation over in my head, I wondered what I could have done differently. Should I have never posted at all? Or was there a way to share my thoughts but avoid the controversy?

And then a most unexpected person brought me a completely different perspective and challenged my pubescent ideas about public debate altogether. At the start of the semester, my daughter joined her college’s debate team. (We felt it was the perfect outlet for all the years of practice she got, arguing with us about why the sky is blue.) Recently, she came home to attend a fundraiser and when I drove her back to school we talked about the latest news controversy and how it was playing out in social media. I asked if she thought they’d be talking about it in her debate team practices this week. And, if so, how heated might those exchanges be. Her answers surprised me.

Debate isn’t about emotion, Mom. It’s about building a case to explain why one side believes what they do. Sometimes I am assigned to debate from the viewpoint I don’t personally agree with, but it makes me understand that side better. I think I’m a lot less biased than I used to be, as a result.”

Wow. There were so many thoughts going through my head at that moment! Such as: is this the same kid who screamed how my viewpoints were crazy and idiotic and ridiculous more times than I can count during her own pubescent years? And then: if this is all we get for our college tuition, it might be worth it!

As I was pondering all of that, she finished up by offering wisdom beyond her years:

I wonder what would happen if everyone was forced to argue from the opposing viewpoint for a few minutes, before stating their own opinions…“

And that underscored the errors in my thinking. I had wondered how other people only posted commentaries everyone seemed to like, forgetting that many of those same people have publicly declared they would unfriend people who didn’t agree with them. I was shying away from something that is a very important part of community, when tackled in a healthy and supportive manner. I let my fear of alienating some take precedence over the opportunity to learn from others.

Apparently, this is not just happening online. Researchers are finding that more of us are moving to live near like-minded people, even hiring a company that focuses on moving people away from blue states and into red ones. On one hand, I understand the attraction of wanting to hang out with people who have similar interests and values. I get that. But, there’s a fine line between preferring like-minded people and isolating ourselves from those who aren’t.

The land of like-mindedness is a highly dangerous place from which to form opinions. We absolutely need each other, with all our different viewpoints and strategies and ideas, for this is what makes us grow together in a beautiful way not possible without such diversity.

This realization makes me so grateful for my social media feeds. They are filled with people who believe one way or another, across a wide range of platforms, theologies, economics, and ideologies. So yes, when I post something even remotely controversial, a variety of sides are represented. It finally hit me: it’s not the people in my feed, or even their ideas, that are the problem, it’s the way in which the medium is used to communicate.

Has social media come of age enough to provide a means for healthy debate? I’m not sure it has. Like young teenagers try on different moods/clothes/activities/feelings, we may have to try different communication methods to figure out how it all works. And, like those teens, we probably get it wrong more than we get it right. So, sometimes we need to listen more than we speak, and apologize when we screw up.

Ask any parent who’s been in the trenches with wanna-be-adults for awhile and you’ll hear this advise:

Avoid assuming the worst (about their behavior or intentions).

And always look them in the eye when you communicate, to make sure you each understand the other.

I think this might be sage wisdom for us all, especially in this age of such fast, direct, and yet one-step-removed communication that hasn’t yet come of age. Perhaps the only way we’re going to make social media work as an effective communication method is to use these same principles with everyone in our communities, both offline and on.

What do you think? In what ways have you seen healthy public debate happen within social media?